When covering the story of Communist East Germany’s first main line diesel locomotive design – the Babelsberg-built V180s, later DR class 118 and then DB class 228 – I touched on the fact that as of the 1960s, Comecon rules dictated that the eight nations within it (the USSR, Bulgaria, Czechoslovakia, Hungary, Poland, Romania, East Germany and Mongolia) could only source diesel locomotives of more than 1,500 hp from either the USSR or Russia.

In the specific case of East Germany’s state railway – the Deutsche Reichsbahn (DR) – this meant that after 1970, their orders for powerful diesels went to Voroshilovgrad in the USSR rather than the factories on their own soil. 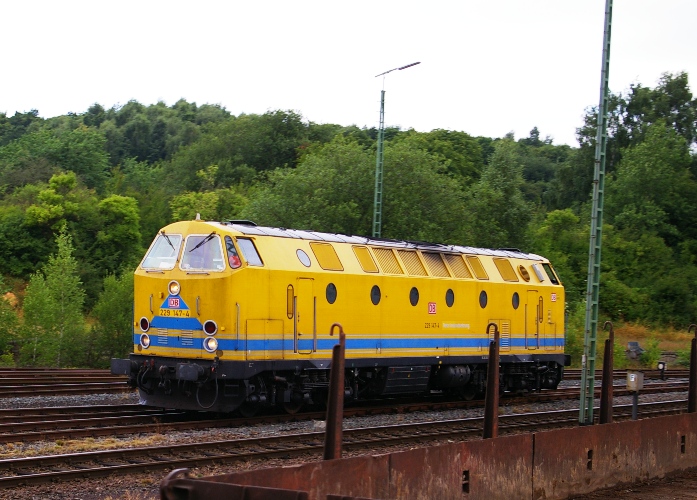 DR’s contentment with the V180 design, however, did not go away.  The light axle load (especially on the six-axle version), component interchangeability with its V60 and V100 locos, and train heating capability (absent from the first Voroshilovgrad products) made them very versatile machines.

The order for 200 2,600 hp, twin-engine, six-axle diesel-hydraulics (essentially, an updated V180 – on paper!) therefore went to Romania – to the “23 August” factory in București (now FAUR) – the factory’s name relating to King Michael I’s coup d’état in Romania on that date in 1944.  Unlike the Russian attitude that seemed to be very much “never mind the specification, you’ll get what you’re given” – the 23 August factory agreed to work with DR and agreed to use East German-built power units in the locomotives, which would have been Johannistal 12KVDs, just like in the V60s, V100s and V180s.  However, supply problems meant that these were not available.  As a result, the Romanians gave the option of supplying the locos with licence-built variants of the Mercedes-Benz MB820 engines that were fitted to some Deutsche Bundesbahn V200s – to be interchangeable with 12KVDs.

By that time, the two prototype series locos had been withdrawn – 119 001 in June 1981, with 119 002 following in April 1984.  They were not the only class members to have criminally short operational lives.  In fact, eight of them had careers of less than 5 years.

The loco with the shortest was 119 140, which had worked for just 1 year and 3 months when it took a dive into the turntable pit at Bad Kleinen in October 1984.  However, the majority of early withdrawals were due to fire damage, something that this class came to be synonymous with. 119 058 at Probstzella in 1983, 119 033 at Sonneberg in 1984 and 119 172 at Leinefelde in 1988 are just some examples that succumbed to “thermal events” before the fall of the Berlin Wall.

The truth is that the issues with the prototypes were never fully ironed out with the production series, and availability was often as low as 50%.  The entire class went through a process of “Eindeutschung” (“Germanisation”) where their Romanian licence-built engines were replaced with 12KVDs as just one part of a process of ironing out build issues.  This did improve reliability – even if only slightly – but had the knock-on impact of denting the reliability of class 118 as many of the components were taken from the pool of spares intended for that class.  Indeed, part of the reason that so many accident and fire-damaged 119s never returned to service is that they immediately became spare parts donors to help try to keep as many of their sisters in traffic as possible.

These locos gained the nickname “U-Boots” predominantly from the “porthole” engine room windows that were reminiscent of submarines – but DR railwaymen were also known to quip that it was equally because they frequently “dived” out of view…into the works!

The above is a link to an excellent video uploaded to YouTube by user corvetten12 showing locos of both classes, 219 and 229, at work in Thüringen.

The beginning of 1992 saw the entire (remaining) class renumbered into class 219, in advance of the merge of the Deutsche Reichsbahn and the Deutsche Bundesbahn.

The early 1990s – as with the V100 family of DR hydraulics – saw the locomotives go through a rolling programme of re-engining with the latest version of 12KVDs, which were of 1,500hp each (as in DR class 114).

Reunification, however, opened up a different avenue to try and finally make these locomotives reliable – Western technology direct from source.  In 1992/93, 20 class 219s were sent to Krupp at Essen for a full refurbishment, which included re-engining with twin 1,685 hp MTU 12V396 power units and a raising of plated speed from 120 to 140 km/h.  These locos emerged as class 229 and became express passenger locomotives on the main lines of the former East Germany that had not yet been electrified.

However, the cost to convert each loco into a 229 was weighed up, and the decision was reached that this attempt to turn a sow’s ear into a silk purse was not appreciably cheaper than procuring brand new locomotives.  Consequently, only the 20 machines ever went through the process.

Effectively, this decision doomed both class 219 (as a terminally unreliable design now in a country where the motive power requirement was diminishing anyway) and class 229 (as a small non-standard fleet) to an imminent withdrawal.  The last “U-Boot” bowed out of front-line service in 2002.

However, there was one further attempt to make a decent loco out of class 219 – 219 158 was experimentally fitted with two Caterpillar 3512-series power units of 1,800 hp each at Chemnitz Works in 2001.  The experiment was not deemed worth rolling out further, however, and 219 158 remained unique – as it still is, in its retirement with the Dampflokfreunde Berlin, for whom it still works regular main line railtours.

Although just one of many collisions that befell the “U-Boots” over their 25-or-so years, one in particular sticks out in the memory – possibly due to a hair-raising photo being featured in Rail magazine at the time, that I’m sure most of us who read it remember seeing!

Good Friday, 9th April 1993 saw 229 113 on IC995 from Berlin Hbf to Stuttgart Hbf, and 218 267 hauling D10545, a Hannover Hbf to Berlin Zoologischer Garten train, collide head-on, at speed, in the vicnity of Berlin-Wannsee.  Three people died – both railwaymen on the footplate of the 218 and a passenger on IC995 – and 49 were injured.  The 229’s train had been incorrectly advised by the Fahrdienstleiter at Wannsee to proceed “bang road”, despite the line being occupied by the rapidly advancing “rabbit” and its train.

A photo of 229 113 passing Berlin-Ostkreuz on the empties for IC995 on that fateful day, about 90 minutes before the collision, along with the memories of the photographer of the events surrounding the collision can be found here (in German).  Almost certainly, the next time 229 113 was in a viewfinder led to a photo that has now become infamous – as it was taken by pure chance by a passenger in the first carriage of D10545, showing the two locomotives about three seconds before impact.  This photo is nowhere on the internet, but as above, it is in a Rail magazine from the time, along with the July 1993 issue of the German magazine Eisenbahn-Kurier, and it is also in the book “Reise ins Verderben” by Erich Preuss, should you wish to track it down.  There is also a short documentary called “Zugunglück in Wannsee” about the collision which is worth your time on the occasions that it can be found on the internet or on German TV.

Assuming that the information about the Romanian exports is correct, 189 of the 200 “U-Boots” have been scrapped.  Only 3 of the survivors are currently operational, none of which are “classic” 219s, consisting as they do of unique Caterpillar-engined 219 158 and two of the class 229 conversions, 229 147 and 229 181.  There was a little scare recently with 229 147 when it – true to form! – caught fire at Weimar on 23rd May 2017, requiring the attention of the fire brigade, but happily it has now returned to traffic.

219 084, in the care of the Thüringer Eisenbahnverein was operational until 2014/15, under an agreement with DB Regio that saw it work a considerable number of service trains in the area that was to have run until 2016.  However, a serious engine failure saw it return to the museum in Weimar early, in 2015, where it remains.  It does not look like a return to service is on the cards, at least for the time being.  With the availability of spares being a major issue, and the only other “real” 219 remaining in existence – the first production machine, 219 003 – being very much a static exhibit since its withdrawal in 2001, it must be wondered whether this is a sound that will ever be heard on the main line again.  Hopefully, it will.