As part of the ongoing dieselisation of the Belgian railways in the 1950s and early 1960s, the SNCB/NMBS was a strong proponent of General Motors power.  Hot on the heels of its order for the 42-strong, 1,950 hp 16-cylinder Co-Co class 205 (later class 55) intended for work in the hilly east of the country, in 1961, came a further order for what would eventually total 136 machines built to a scaled-down design.  These were to be known as class 212, and were 1,400 hp 12-cylinder Bo-Bos intended for mixed traffic use across the entire country. 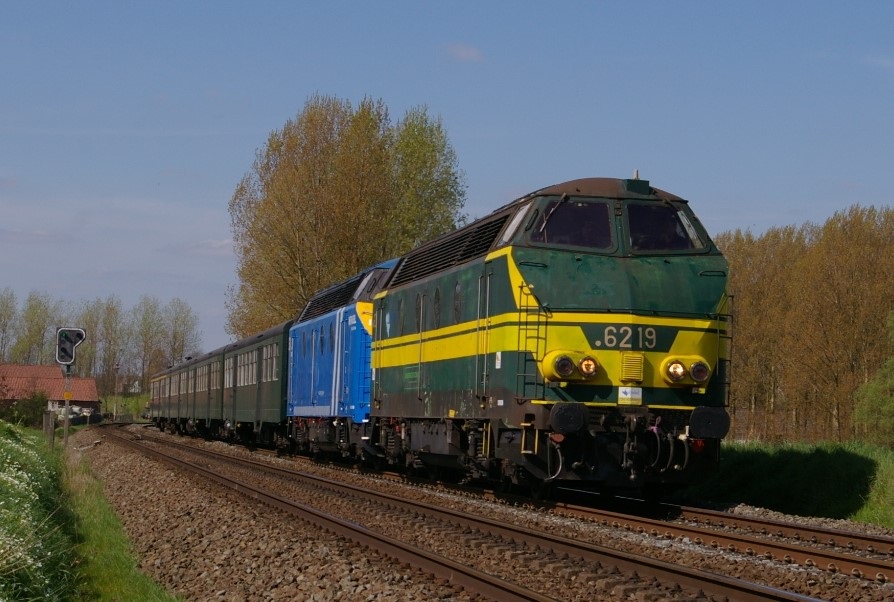 In August 1982, 6215 was trialled with ETH equipment and – in the same vein as the seven class 55s similarly modified at around the same time – it was painted in light blue livery (see photo here).  However, unlike with the 55s, this trial was not successful, and the ETH equipment from 6215 was taken out and fitted to an eighth 55, 5531, in the early 1990s.

The class remained a common sight across Belgium, including on steam-heated push-pull passenger trains, right up until 2003, when they were usurped by class 41 “Coradia” DMUs.  As much as steam heat is a sadly missed feature of the railway scene in Western Europe, many of us will fondly remember the feeling of hoping that the loco rolling in would be one that carried a “boule” (“dot”) in front of the number, indicating that it was a no-heat machine!

Sadly, all that is in the past, but many 62s do at least continue to see out their existence on infrastructure and works trains for TUC Rail and Infrabel.

Above is a link to a video uploaded to YouTube by Infrabel TV showing 6214 and 6231 on a key duty for the remaining 62s – the weedspray train.

Infrabel, as the owner of the Belgian railway network (much like Network Rail in Great Britain), has been known to use its diesel locos for other projects too.  One fairly high-profile example was the use of newly-liveried 6228 as the “poster girl” for an anti-trespassing publicity campaign in 2015.  I won’t embed the video directly (as it is a bit shocking, using mannequins to simulate a fatality) but it can be found here.

The most interesting further use of a 62 is that of 6302, which was exported with the assistance of an Italian dealer to Venezuela in 2005.  Here is a photo of it taken over there in 2009; it was expected that it would then be involved in the construction of a new railway line between San Juan de los Morros and San Fernando de Apure, but I’ve been unable to find anything else out about the fate of this loco since then – perhaps you can help?

Eventual withdrawal from the last remaining duties in Belgium may see a number exported to that usual “dumping ground” of redundant Belgian locos – Italy – which could see some of the older machines eking out an existence over there dispensed with.

6289 has been preserved by the PFT-TSP, which is currently being restored with the assistance of Christmas tree 6266, which was scrapped in 2017.  Additionally, 6306 was “preserved” by SNCB-NMBS Holding Patrimoine, but it is understood that this is no longer the case.  However, it is to be hoped that further 62s will enter preservation in the medium-term.