The City Airport Train (CAT) is a loco-hauled, non-stop express passenger service which acts as a city transfer from Wien airport (VIE). 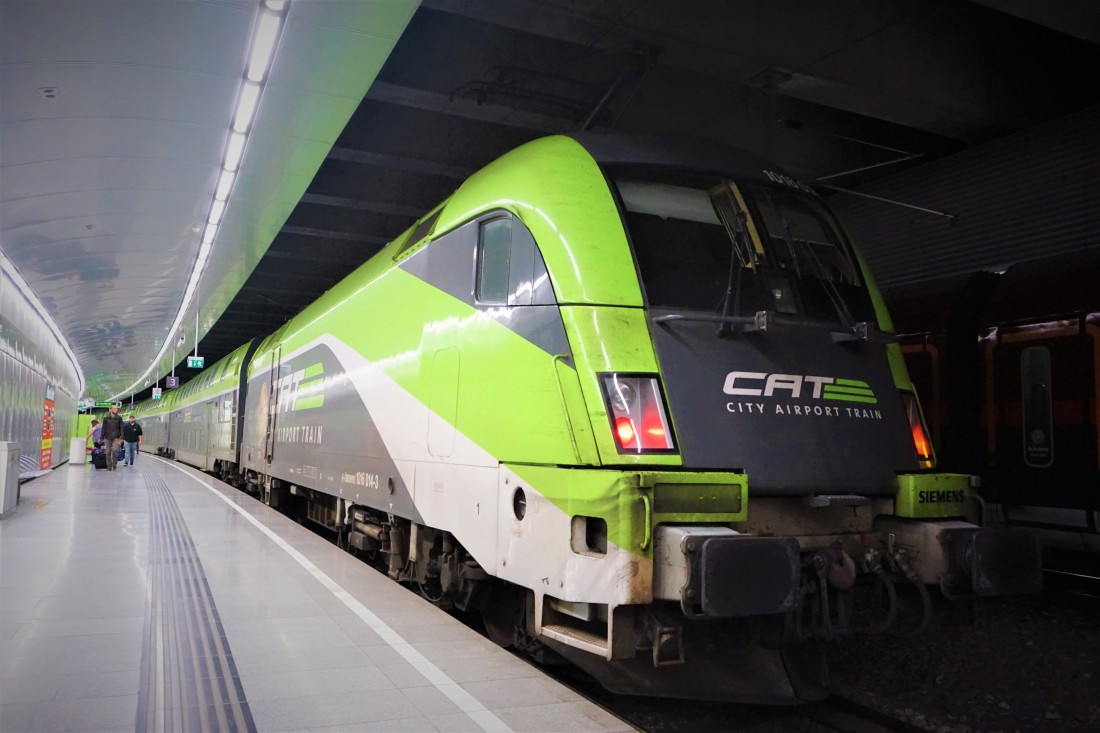 From reports I read online, some haulage enthusiasts do not always use the CAT.  Let’s start with the potential reasons why not: maybe the restricted scope of different machines that tend to appear on them, maybe because neither rover tickets or FIP are accepted on them (specific tickets need to be purchased – see below), maybe because it drops you in the city centre and not at the main station – although Wien Mitte is on the Wiener Stammstrecke which itself is a hotbed of intensive loco-hauled activity! – or maybe because there is a cheaper loco-hauled alternative in the Railjet services which do directly serve Wien Hbf.  These are all valid; not everyone’s travel itineraries are the same.

However, I would certainly highly recommend the CAT to you above the alternatives, and there are a number of (very) good reasons for this.  Very usefully, they guarantee that if you miss your outward flight from VIE due to a delay of more than 30 minutes on the CAT, they will reimburse you the cost of a new plane ticket; that kind of ‘insurance’ when using public transport to an out-of-city airport is potentially worth its weight in gold (although even the airline staff use the CAT, such is its reliability).

Free left-luggage lockers at Wien Mitte are also provided, as well as the ability to check hold luggage in there too (for Austrian Airlines, Lufthansa, Eurowings, SWISS and Brussels Airlines only) – these are then conveyed in a special compartment in the lower deck of the Steuerwagen.  Also, my fiancee – who I can safely say does not like trains quite as much as I do – liked it, which is a very important point to consider if on a ‘normal’ holiday!  The trains are a premium product, essentially an all-first-class offering, with leather seats, power points, WiFi, information screens, free magazines and a lot of luggage space.  We found it worked well as an introduction to the city, giving us some time and resources to familiarise ourselves with the capital on the short journey into its heart.

A single ticket on the CAT, purchased at the station costs €12 single or €21 return (valid for six months).  However, if you purchase your ticket online, you make a small saving: €11 single or €19 return.  Children aged 14 and under travel free.

It is obviously best used for its intended purpose as an airport transfer service, but you could if you so chose certainly pitch up at Mitte, buy a return, have one loco out to the airport, wait there for 45 minutes, and come back with the other – total time for the round trip being 1 hour 18 minutes.  The trains pass through Wien Rennweg and the ‘main’ part of Wien Mitte station, so it should be no problem for you to see which individual locos are in use whilst spending some time travelling up and down the Wiener Stammstrecke.