Elsewhere on this site (in the articles on the JŽ class 361, 362 and 342 electrics) I have covered the political developments of the first half of the 20th century that led to the electrified railways of the northern part of the Socialist Federal Republic of Yugoslavia using a different voltage to the rest of the country – 3,000 V d.c. as opposed to 25 kV a.c.

Initially trains were operated by locos that were even older than the catenary, and by the 1960s these not only needed replacement by more up-to-date machines, but the extension of the 3,000 V d.c. across the north required a bigger fleet of electrics full stop: the wires going up between Postojna, Ljubljana and Jesenice between 1961 and 1964 led to the procurement of the 362s, whereas that on to Dobova and Maribor between 1967 and 1974 gave rise to the 342s.

By the mid-1970s, the 361s – dating from 1931/32 – had been relegated to freight traffic and, showing their age, were ripe for retirement.  On top of this, JŽ’s 3,000 V d.c. network was extended still further in 1975, from Divača to the port city of Koper, which generated heavy freight traffic that would have been beyond the capabilities of most of the existing electric traction.  The solution to both conundrums was to procure a fleet of 39 modern, powerful electric locos, which were christened class 363. 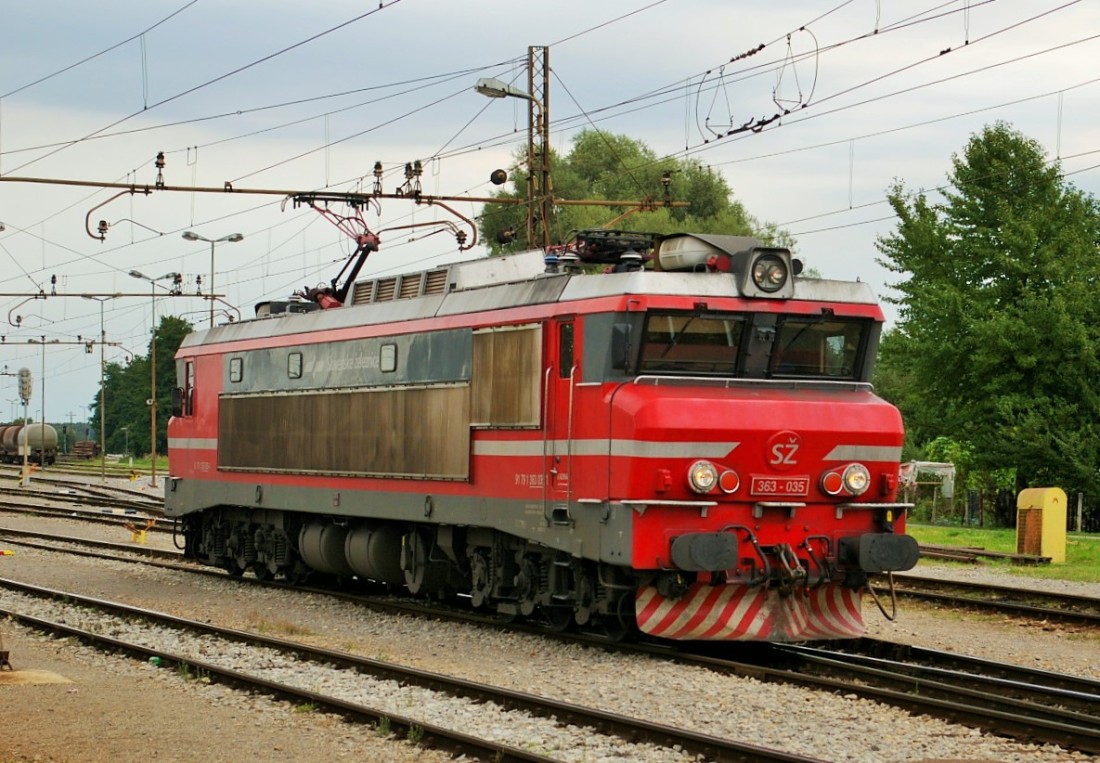 Breaking with the tradition of procuring off-the-shelf (or nearest offer) Italian locomotives to work under the 3,000 V d.c. wires, JŽ looked around and settled on a variant of the French Alsthom Co-Co class CC6500 electrics, which at the time were settling in very well on the SNCF.  They were its most powerful locos at the time, handling crack 200km/h expresses and also heavy freight trains and making an excellent account of themselves on both.

Being thoroughly modern machines intended for mixed traffic use, the 363s were built geared for both express passenger (125km/h) and heavy freight (75km/h) use.  They bore a very close visual resemblance to the CC6500s, also being built to Paul Arzens’s classic “nez cassé” (“broken nose”) design, and gained the nickname “Brigitte” due to the perceived visual resemblance to the French actress Brigitte Bardot!

This accident and the replacement of 363 002 will form the subject of an article on this site at a later date, but it is true that whilst there is a lot of conjecture about the accident online, there are comparatively few facts.  It is also, tragically, true that the driver perished in the accident.  With shades of the history of British Rail loco 47299, or indeed the “Schweiz-Express”, the replacement 363 002 was involved in a collision and subsequent derailment with a tank train at Pivka in 2001 (see here)…

The railways in the Socialist Republic of Slovenia were electrified at the “Italian” system of 3,000 V d.c., but those in the rest of Yugoslavia, which did not have pre-existing wires and locos, were electrified at 25 kV a.c – save for the section from Slovenia into Croatia through Rijeka and over the steeply-graded route to Moravice.

At the break-up of Yugoslavia in 1991, all of the 363s remained within Slovenia and passed to the newly-created Slovenske Železnice (SŽ).

Most of the 363s’ use today is on freight work, but they do have some passenger diagrams.  The excellent “gen group” European Rail Gen contains a set of these in its files section.  Do note, however, that they very frequently deputise for unavailable class 342 “Mopeds” too, so it is worth keeping an eye out on other trains within Slovenia.

Do make use of these diagrams, as that’s what they’re there for – but given the above, please treat them in the spirit they are intended.  Most importantly, if you benefit from them, please post your sightings back to ERG for everyone’s benefit!