For four years, one of Europe’s fastest locomotives wore a unique livery prominently featuring the unmistakable shape of the infamous 23hp East German “Trabant” car.  What was it all about?

It was one of two such machines (182 509 and 182 560) to get unique specially-designed liveries – different on each side – in summer 2014, to mark the impending 25th anniversary of the fall of Communism in Europe.  182 560‘s was dedicated solely to the fall of the Berlin Wall, whereas 182 509‘s was on the theme of the “Pan-European Picnic”, arguably a lesser-known event – whilst still featuring symbolism of Berlin and of the actions of those at the Picnic leading to what eventually happened there.

So, what was the “Pan-European Picnic” and what was the livery all about?  As I described in my article on the Flüchtlingszüge from Prague, 1989 saw burgeoning unrest through the Communist states behind the Iron Curtain, and history tells us that this resulted in the systematic collapse of the regimes in each of these countries by the end of the year.  It was a watershed year but these momentous events were characterised not by shows of aggression (except in Romania) but by demonstrations of peace.

One of the main characteristics of Eastern Europe in 1989 was the gathering pace of Mikhail Gorbachev’s policy of perestroika, of not interfering in the internal affairs of the Communist states.  It was in this climate that the Hungarian Minister of State Imre Pozsgay and the Austrian Otto von Habsburg, an MEP and President of the International Pan-European Union, sponsored an event to be held near Sopron, a Hungarian town near to the Austrian border, on Saturday 19th August 1989. 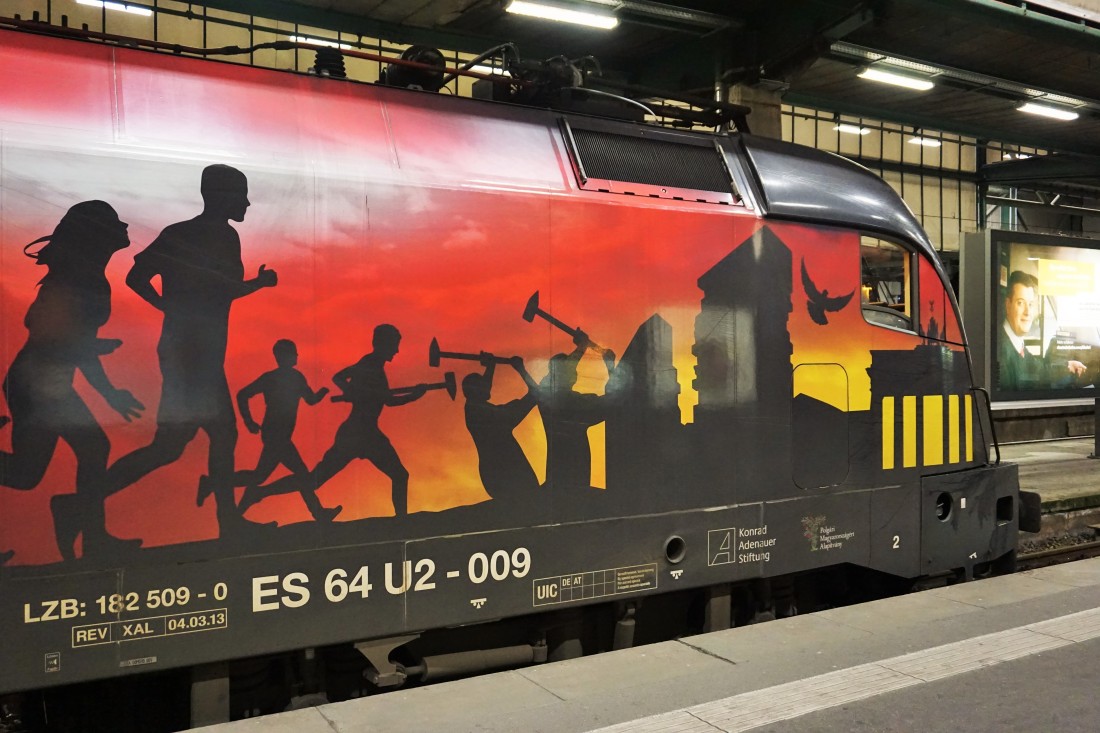 What was not planned for, however, was the additional attendance of 600 enterprising East Germans who had been on their summer holidays in Hungary, had heard about the event and had decided to seize their opportunity to escape to the West.  The border guards turned a blind eye to this and their “Republikflucht” had been successful.

Again, history informs us that the border between Hungary and Austria was finally opened properly on 11th September and East Germans headed there in their droves in an attempt to leave – and (again, as described here) the dominoes had begun to fall that eventually resulted in the breach of the Berlin Wall – hence the liveries on 182 509 and 182 560 each commemorate events that neatly book-end what are probably the most significant twelve weeks in European history in the second half of the 20th century.

And what of the “230km/h Trabant” in the title?  These little two-stroke cars, manufactured by VEB Sachsenring in Zwickau, were ubiquitous in East Germany, and indeed through other countries behind the Iron Curtain; they are still particularly present in Hungary.  But they were also the vehicles that East German families drove in to Hungary in their attempts at escaping, that were left abandoned on the streets of Prague as their owners crammed into the West German Embassy, and that smokily and noisily inched across the Berlin Wall when it was first opened on that landmark night in November 1989.  As a result, Trabants became one of the most instantly-recognisable symbols of the events of 1989, and so it’s entirely appropriate that one was included in this design.  The irony was that a vehicle that struggled to hit 100km/h in real life could be “seen” flashing through the German countryside at well over double that!

As a Dispolok machine, the “Pan-European Picnic” loco lived a somewhat nomadic existence, but since it gained its special livery it worked predominantly for DB (both on regional passenger services for DB Regio, and on Intercity expresses for DB Fernverkehr) and, from January 2017, it was hired to the Swedish firm of Hector Rail.

Although Hector Rail is based in Sweden, 182 509 is as yet only passed for use in Germany and Austria.  As well as a number of freight flows across the former, Hector Rail held the contract to provide motive power for the crowd-funded open-access train operator Locomore, which operated a Stuttgart to Berlin and return passenger service between December 2016 and May 2017 (this is now part of the Flixtrain operation).  Although 182 517 worked the lion’s share of these trains, 182 509 did have a stint of a several days working this in May 2017, which is when the photos in this article were taken.