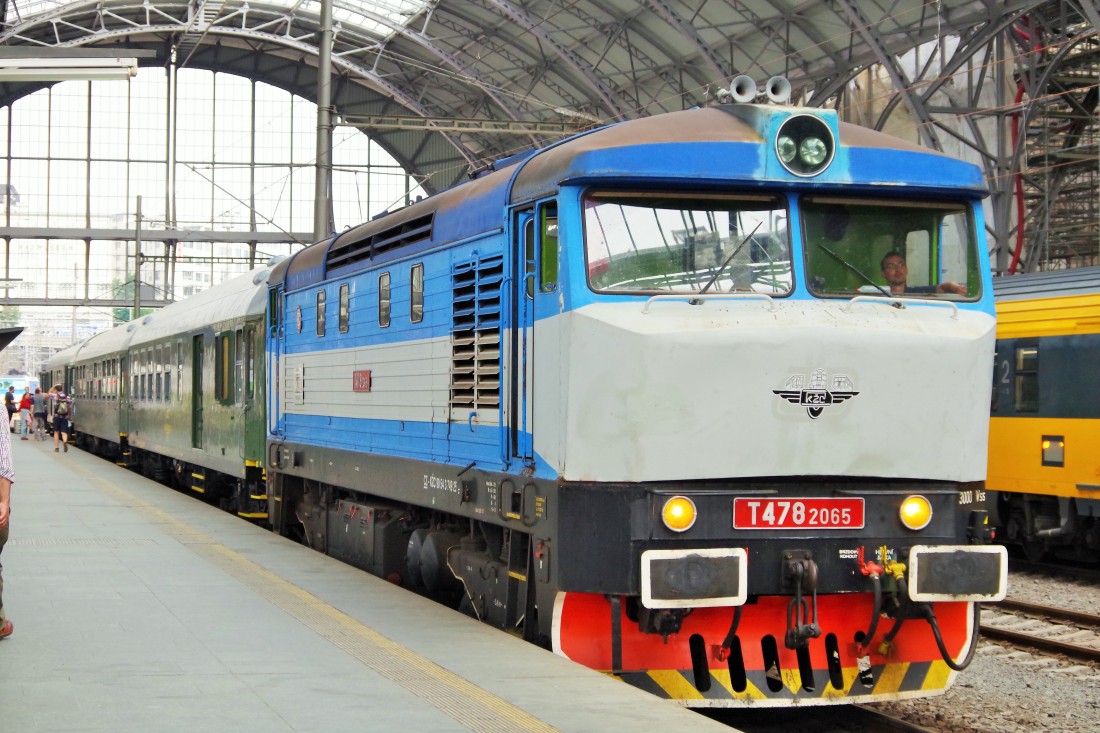 Next weekend sees the start of the 2017 season of Saturdays-only round trips between Praha (Prague) and Rakovník, hauled by the popular class 749 “Grumpy” locos.

Every Saturday between 29th April and 16th September 2017 will see class 749 haulage on an 08:42 Praha hl n to Rakovník (R1581) and 15:32 return (R1580).  Named the “Rakovnický rychlík” (“Rakovník Express”), this is essentially a regular heritage service on the main line operated by KŽC, along the same sort of lines as the “Jacobite” in Scotland.

This is absolutely something that you can combine with a predominantly non-railway city break in Praha.  This sensibly-timed round trip gives a break of 5 hours in Rakovník, although arguably a better destination is the train’s penultimate stop of Křivoklát which is a particularly popular stop for tourists.

If you’re not interested in hitting the tourist trail, then one of your hours during the layover at Rakovník can be gainfully employed on a quick out-and-back run with Caterpillar-engined class 750.7 “Goggle” locos on the route via Kladno to Praha Masarykovo.  The 13:22 from Rakovník and 13:02 from Praha Masarykovo are both frequently reported as 750.7 and a neat fill-in move presents itself from Rakovník to Nové Strašecí and back.  Indeed, you could even use either of these trains to complete a circular round day trip, should you wish to do so.

Even if you cannot spare a full day to cover the round trip, you can do as my fiancée and I did on a Saturday afternoon in 2016, and pitch up at Praha-Smíchov station for 17:14 in order to have the 749 for the brief 4 kilometres round to the main station (hlavní nádraží), for the equivalent of 77p each.  Although this is embarrassing “insect mileage” of the highest order, it did give the opportunity to savour a standing start from a signal check inside the tunnel!

Chances to sample haulage by this class of loco are certainly not rare – indeed, there are still some in the employ of the national operator, and they also work a significant number of charters throughout the year – but this cheerful little operation gives an easy, cheap and usually reliable method of doing so.

As a very brief taster, check out this video of one of 2016’s trains, uploaded to Youtube by Tomáš Hošek:

Point to point fares are available on a distance-based tariff basis, but the return adult fare is 300 CZK, or £9.32 at current prices – not bad for 108 miles of loco haulage.  Tickets can be purchased on the train.

Further info (in Czech) including full timetable at this link.

2 thoughts on “Various dates in 2017: the “Rakovnický rychlík” commences on 29th April”