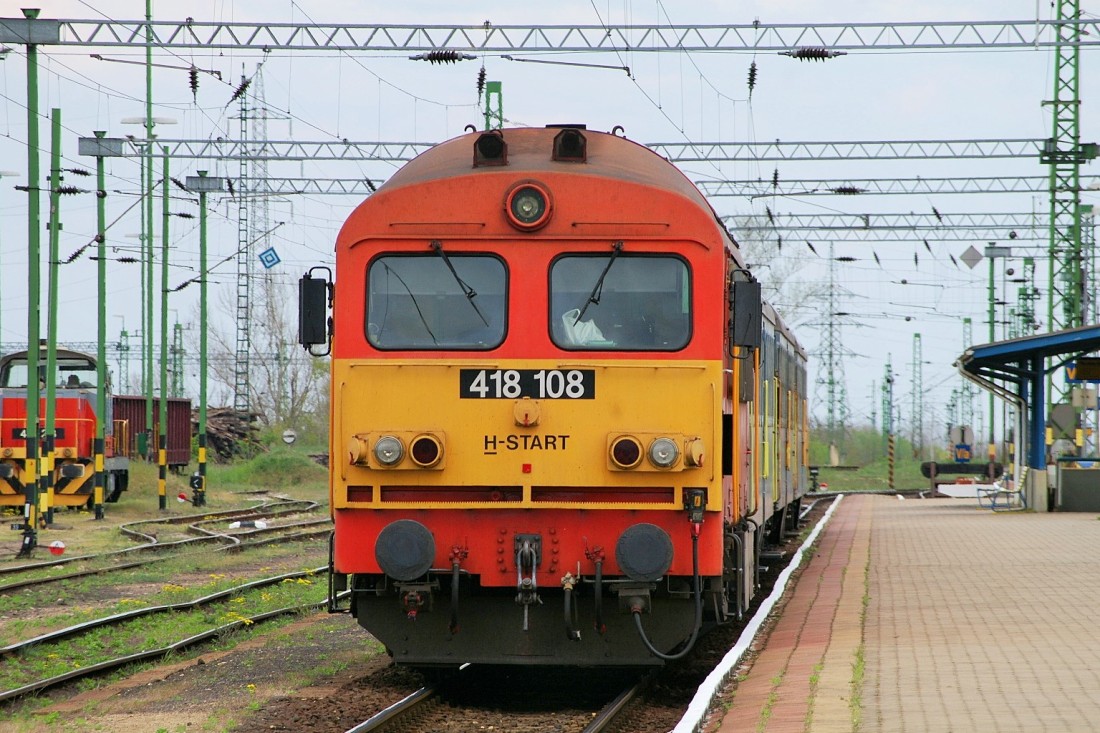 One of my personal favourite European classes is the Hungarian M41 type (now class 418 since renumbering); gutsy 1,800hp diesel-hydraulics built by Ganz-MÁVAG in the 1970s and early 1980s.

114 of these machines were built for Hungary; 107 for the national operator MÁV, and 7 for the private railway GySEV.  (The GySEV machines passed to MÁV in 1987 after the electrification of the Győr to Sopron main line, as a small fleet of class V43 electrics moved the other way).

Of these 114, only 78 remain in service, but just 47 of these retain their 12-cylinder licence-built SEMT-Pielstick power units.  31 of the survivors have been re-engined with quieter Caterpillar 3512-series power units and renumbered firstly to M41 23xx and more recently to 418 3xx.

These locos do have nominal depot allocations, however it is fair to say that they can and do move around frequently.  To give a recent example, I spent a morning covering four of the diagrams booked for Hatvan-allocated M41s out of Budapest Nyugati in April 2017, and was presented with one machine from Szombathely, one from Debrecen, one from Székesfehérvár and one indeed from Hatvan; three of those moved on again within the next three weeks, so it is a very fluid situation.

As a result, rather than listing their depot allocations, I have decided to keep tabs on where the surviving M41s are actually working, with the assistance of the excellent MÁV “mapper”.  This shan’t be updated every day, and it certainly doesn’t purport to be a definitive list of “last workings” etc, but hopefully it will be a useful resource if you are searching for particular machines.  If a loco does not have anything shown against it, then I have not seen or heard of it working for some time; indeed, this might even mean that they are already withdrawn (but were shown as operational on the last list I had).

It is, of course, entirely possible that some of those listed with no recent passenger workings have been stored, or that some not listed might be reinstated at some point.

If you’re enjoying the content of this website, please could I invite you to have a look at how you could support it?  Thanks!